From Connecticut, it was time to press through the traffic streaming out of New York City, sashay around Philadelphia’s activity and then traverse the Baltimore-Washington traffic. Add in a pope and the traffic challenges are there.

The skyline of New York City passing off the left side

While wedged in the southbound traffic as we passed New York, I noticed that the energy consumption was very good for 65 mph. I attribute this reduction to what I call “whole traffic drafting” in which the mass of cars and trucks moves enough air to reduce drag. It’s like drafting behind a semi-truck without having to hold position behind any particular vehicle. 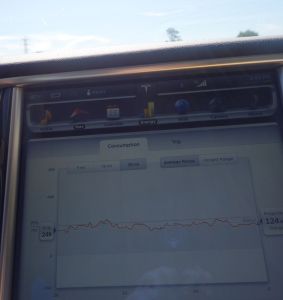 Energy consumption of 249watt-hrs./mile was one advantage of being surrounded by traffic as “whole traffic drafting” helped out.

After passing through New York, I recharged in New Jersey, passed through the corner of Delaware, then headed through Maryland with the plan to visit West Virginia the next day. 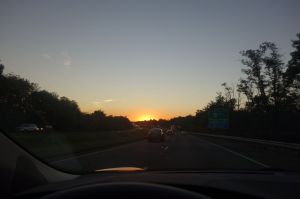 Driving into the sunset with West Virginia on my mind