The next day I headed north from Colorado, into Wyoming. The Cheyenne supercharger is a curious affair, hidden in the corner of an RV sales lot, and rather slow at charging by supercharger standards. Don’t expect it to win the Supercharger of the Year award anytime soon. Looking for a breakfast spot, though, I walked into nearby Frontier Mall and ordered a panini and coffee from the friendly propritors of Na Cafe Coffee Shop. Mmmm.

After a quick swing through western Nebraska, we returned to Wyoming for a supercharge at Lusk, then hightailed it to the supercharger at Rapid City, S.D.

Most of the day’s traveling progressed through the grasslands of Wyoming. In many places, buttes rose from the otherwise shallow topography, reminding me of my first visit to Wyoming. I visited my brother Bill who was newly married and living at the base of one of these buttes. In short order we agreed that with the hawks taking such good advantage of the ridge lift off the butte, there must be good lift for a radio-controlled glider too, so we ordered one. The craft with 6 ft wingspan soon arrived, but someone had packed two left wingtips instead of a left and a right. No worries, we would build our own wingtips out of balsa wood, using the ribs of the existing wingtip as our guide. Our modified glider performed surprisingly well, and we soared for ten or twenty minutes at a time, teaching ourselves aerobatics and landing to the side of the butte in a grassy area sometimes populated with antelopes.

Now, as I headed north, I listened to an audio book, a biography of the Wright Brothers by David McCullough. What a delightful drive– imagining the air currents over these buttes, reminiscing about aviation adventures with my brother, and learning of the methodical ways that the Wright brothers unraveled the secrets of flight. All these moments took place in the quiet, safe capsule known as the Tesla Model S. 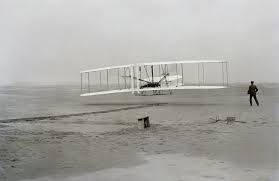 An audio book about the Wright Brothers captivated me on the drive north. I will have to stop at Dayton, Ohio, and Kill Devil Hill, N.C. on this trip to bring the story fully to life.

Heading to Rapid City, I drove through the green grasslands of the great plains. It didn’t take much imagination to picture enormous herds of buffalo roaming these parts a couple hundred years ago. Before long I passed east of the Black Hills. What a curious place the Black Hills are. They are the west with all its mountain crags, pines, gorgeous canyons, deer, cougars, the whole shebang placed right here in the northern plains as if to share the western mountains with one and all.

Once outside of California, I seldom competed with other Teslas for supercharger space. What a surprise to take the last of 4 charging spots at the Rapid City supercharger. I believe all the other cars had out-of-state licenses too.