The road back to Houston

And so a long drive back through Canada lay before me.  I endeavored to apply my new knowledge of off-network charging to the trek:
* Charge overnight at 50 amp spots to maximize daylight driving time
* Adjust speed as necessary to achieve desired range
* Avoid dark and cold driving in deer country and at temps that compromised range

Early on the third day of our stay in the Steward/Hyder area, Iceman and I loaded up our stuff with 241 miles range showing and began the drive back to Smithers. It would be a more challenging drive than the drive down, since we lost 1600 feet of elevation coming to Stewart but would be gaining that amount on the way back, for a net difference of more than 3200 feet. To make up for this handicapped, I chose to drive at a slow 40 mph for the majority of the route to Smithers.

Weather was overcast with a light drizzle of rain, but temps were moderate. Some energy was needed initially for defrosting, but not much was needed once underway with the car interior warmed up. Tesla’s Navigation software gave this alert as be pulled out of Stewart:

The energy available at destination of “-2%” didn’t look promising, but I knew Tesla’s nav program was calculating based upon normal speed limit driving, not range enhancement speeds

By turning off air-conditioning, lowering temp, and setting defrost mode, I was able to get very satisfactory interior environment without using much energy

In many ways, the trip couldn’t have been much better. The early morning departure meant that we had the road to ourselves, with frequent waterfalls and wildlife sightings to break up the north country greenery. The Bear Glacier looked entirely different from this new angle as we approached it.

By the time we reached Maziadin Junction, where we joined the Trans-Canada highway, the Tesla Navigation software had digested our driving and environmental controls style and had come up with a much more optimistic estimate of energy upon arrival at Smithers 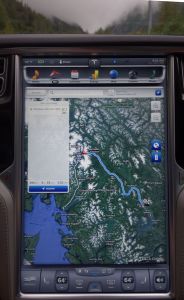 An estimate of 24% energy remaining at destination sounded MUCH better

Just past Meziadin Junction we started spotting bears. It was the perfect trip with comfortable energy management, no traffic, and all the attributes of the north. 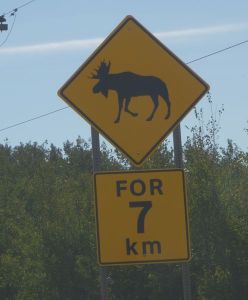 One of these would also make a poor hood ornament

As I neared Smithers and the traffic picked up, I had the confidence to increase my speed. At destination the Tesla still showed more than 50 miles range remaining. I could have overnighted at Smithers, but such a move would mean a long recharge the next day at Houston. Instead, I did about a 6 hour recharge with the 110 volt, 12 amp charge at Smithers as I rested. Then, as the evening light offered just enough illumination for a comfortable 40 mile drive uphill to Houston, I set off.

At Houston, the A&W was closed now, the visitor center was closed as well, but I had called ahead to chargepoint and a quick phone call activated the public charger. With my seat cranked way back into a near horizontal position, I positioned my pillow, gave Iceman an under-the-chin scratch and retired for the night. At intervals of approx. once an hour, the Tesla’s ventilation system would shut down (to preserve energy, I suppose) and I remedied the situation by briefing cracking a door open and then closing it, which reset the clock and allowed comfortable ventilation to return. Tesla ventilation was far superior to a cracked window, letting in mosquitoes.