While we were still on the mainland to sample winter, SpaceX chose to launch a rocket from Vandenberg AFB in California. Naturally, Iceman and I headed over there in the 70D to witness the event. I have always been a fan of space travel and even applied to the astronaut program once during my youth. The trip was a perfect excuse to see Tesla’s autopilot at work.

On the southbound run to Vandenberg, I decided that a supercharger stop at Tesla’s Fremont Factory would be in order, and so Iceman and I pulled it and hooked up. During our short wait, I said hi inside, the Tesla employees remembered the story of Iceman and me touring America, and they invited Iceman in while we waited. 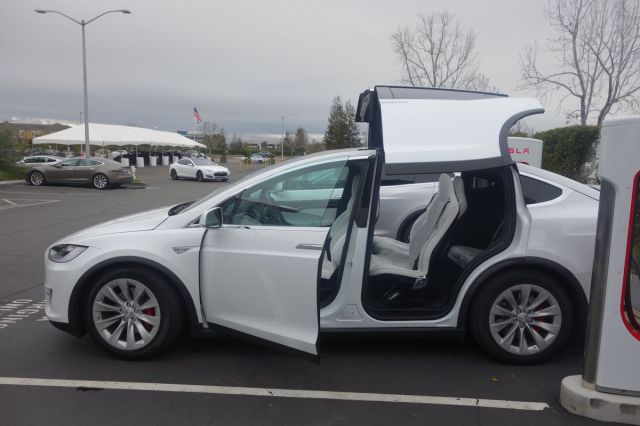 Next to our Tesla, a brand-new Model X was charging. The husband said that the color scheme of their X looked so much like a Star Wars storm trooper, that his wife dressed up the day before as a storm trooper for some shots next to the X. Too fun!

The next morning we arrived early at Vandenberg and scored a great parking spot from which to watch the SpaceX Falcon 9 rocket ascend into the heavens. I met another Tesla driver at a nearby supercharger, and he turned out to be a nice fellow I had known for years in a Tesla investor’s forum. We convoyed over to our launch viewing position and began the wait.

The weather forecast called for the low overcast to burn off about 8am and the launch would take place hours later. From time to time Mother Nature played with us, giving us a peek at blue sky, then just as quickly taking it away. The rocket would appear over the hills behind me in the photo above, and those hills were covered with grazing cows.

Launch time arrived and we heard those mighty Falcon 9 engines coming to life. The anticipation was immense. The cows on the hillside began a stampede, heading away from the noise as it grew steadily louder. After a bit, the noise started getting quieter and by then we all realized that we wouldn’t even get a glimpse of the rocket today. The cow stampede and the noise were top notch, though. The Falcon 9 successfully launched its payload into orbit that day, but a landing leg that failed to lock in the down position meant that the rocket’s landing on the barge would not be successful.

On the drive back north, we encountered lots of rain. It was here that I really learned to appreciate the value of Tesla’s Traffic Aware Cruise Control (TACC). The radar detected changes in the speed of the car ahead of me noticeably quicker than I could with my eyes, and thus the adjustments to our speed as the traffic slowed were gentle and not only added safety to the trip but also reduced driver fatigue immensely.