In any Tesla road-tripper’s stories of 2015, the state of Arkansas ranks as one of those big challenges, since it is one of the few black holes left in Tesla’s supercharger network. Fortunately, with knowledge gained from the Alaska run, Arkansas was easy.

My route took us down from Wisconsin, through Illinois, and then to the St. Charles supercharger in Missouri. To my great delight, the distinctly autumn temperatures of the northern states gave way to the lazy warmth of summer by the time I reached Missouri. Best yet, we had lightning bugs in the air that evening!

Illinois ranks right up there with my home state of Hawaii as a place to be careful for speeding tickets while en route. It seems both these states like the revenue and work hard to maximize it. In contrast, Missouri’s low speed limit of 60 mph was largely ignored by the end-of-work commuters, and they zipped along at about 80 with little care.

This high-speed traffic was a bit problematic because I had another 200 mile run, this time southbound to camp in the RV park of the Lady Luck Casino in the far southeastern tip of Missouri and partake of that good 50 amp electricity so that I began the next day with a full 243 mile charge. Whenever you check into an RV park, it’s important to establish a positive rapport with the person on the other side of the desk. Otherwise, it is way too easy for them to say, “No, we don’t have a policy for letting electric cars into the RV park.” In this case, the lady was a delight, we chatted amiably, but she needed to fit my vehicle into one of three categories: motor home, trailer, or camper. Clearly, with its folding seats and the added refrigerator-freezer, I was driving a camper, so I gave her the answer she was looking for and all was good.

The next morning Iceman and awoke early in southeastern Missouri. We broke camp then headed south for the 25 mile run into Arkansas. With goal reached, we zoomed back to the RV park and topped off our battery again before checkout time so that we had the range to make the long run to the Nashville supercharger. Morale of the story: sometimes it’s nice to work from a basecamp when you’re trying to claim another state. 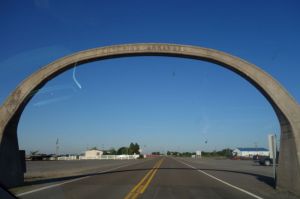