Northbound to Dayton and the Wright Brothers

As many of you remember, I’ve had a thing about the Wright Brothers on this trip. I listened to an audible.com version of David McCullough’s biography of the brothers and a number of curiosities remained unanswered. Hopefully, the trip to Dayton would provide clues.

A series of superchargers led me easily from Knoxville through Lexington and Cincinnati and then up to Dayton. A loop across the Ohio River allowed me to claim Indiana too, for a total of four states in one day. We’re now more than halfway through the states!

After a good night’s sleep in a motel, I hit the ground running. First stop was the U.S. Air Force museum. I have visited before and know how easy it is to get overwhelmed at a huge museum. Instead, I concentrated on the 1909 Wright flyer and planes that soon followed. One observation? I tend to agree with Antoine de Saint Exupery that a design is mature not when there’s nothing left to add, but rather when there’s nothing left to remove. Breakthough aircraft so often were pleasing to the eyes in the same way that a Tesla Model S is pleasing to my eyes. The curves are aerodynamic and I think our brains understand the implications of this sleekness and it enhances our opinion of the machine’s beauty. 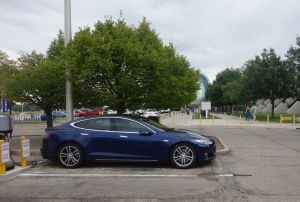 The Tesla claimed the best spot in the parking lot and received a complimentary charge, too. Thank you Air Force! One of the beauties of an electric car is that I could leave the air conditioning running to enable Iceman to keep his cool in the back seat while I toured the museum. One must be mighty careful to keep checking the temperature from a smartphone, though!

Here’s the 1909 Wright Flyer that was purchased by the Army. A constellation of contemporary aircraft surrounds it.

Here is the aircraft of the nemesis of the Wright Brothers, Glen Curtiss. Although credit for solving the mysteries of stability and control clearly goes to the Wright Brothers, one must still appreciate the contributions of Curtiss, including ailerons instead of wing warping, wheels instead of a launch catapult and skids, and a control wheel instead of the various levers and cradle employed by the Wrights.

Next stop after the Air Force museum was the Wright Memorial, where I learned from a park ranger that the original Huffman Praire site of the Wright Brothers flights in Ohio still existed and I could visit! Fortunately, the land is in a flood plain close to Wright-Patterson Air Base, and development has never overtaken it.

Iceman and I arrived at Huffman Prairie to discover the full flying site preserved in nearly the exact condition it was in during the years of its use by the brothers for testing the Wright Flyer II, III, and for use as a civilian flight training school by the brothers. An acceptable wind for flying the Wright Flyer, about 15 knots, was blowing that day under blue skies. Eight white flaps on poles marked the boundaries of Huffman Prairie.

Best yet, we had the place entirely to ourselves. 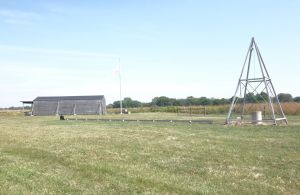 Here’s the replica Wright hangar and catapult system, precisely where they stood back in 1904. Only the black dog has been added. My imagination was soaring and I could picture Orville or Wilbur taking the 1905 flyer around this field, performing figure 8s to demonstrate the maneuverability of the plane.

Iceman somehow picked up on my excitement, because out of the blue he felt the need to zoom around the field. I quieted him, revved up the video camera, then invited him to resume. Keep in mind this is a 10 year old dog. Here you have it:

Now, it would be hard to top this experience, and I had both a Tesla and Huffman Prairie grin simultaneously, but there was one more stop that day. On the south side of Dayton, the Carillon Historical Park boasted exhibits that a Wright Brothers fan must see, and so we headed south without delay. 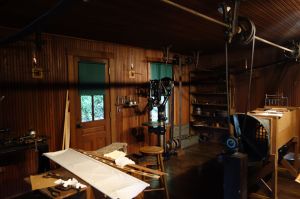 Here’s a reproduction of the Wright’s airplane shop. Notice how the home-made wind tunnel was powered.

The 1905 Wright Flyer itself, after a careful rebuild

This plane was also known as the Wright Flyer III, and it was the machine that really proved that flying was now a practical endeavor. The original 1903 Wright Flyer was damaged in a windstorm. Although it was controllable, it was only marginally maneuverable. The 1904 Wright Flying II used a lower camber wing (the wing had less lift-creating twist from fore to aft) than the original Flyer, which turned out to be a handicap. In the 1905 Flying III, the original Flyer’s wing shape was readopted, and with additional refinements the 1905 Flyer achieved flights in excess of an hour (besides being far more maneuverable than either of the previous Flyers).

I spent a good amount of time following the control cables from the pilot’s station to the aft struts on the wings and slowing coming to realize how the warping mechanism worked.